Microsoft had the great idea to forbid changing the wallpaper in the Starter Edition of Windows 7, so that people would buy more upgrades. But that’s really annoying. I mean – you have got a nice netbook with Windows 7 installed, and now you probably want to customize it and add a cool wallpaper! Who wouldn’t? But – oh no – there is no way to do that! Crap, isn’t it?

I was annoyed too, but I started investigating, thinking and trying, I just wanted to find a way to change the wallpaper without installing a huge software like Talisman Desktop Pro, which eats up a lot of performance, or MyColors.

And I was successful! I finally figured out a solution and created a little tool which does everything for you, so I can share that solution with everyone suffering from the same problem! I don’t want you guys to be as frustrated as I was!

How to use that tool

It can also happen that the wallpaper resets to default if you change something which causes Windows’ “UpdatePerUserSystemParameters” function to be executed, like changing the window colors. Don’t worry, that change will be only temporarily. At the next logon, it will be gone.

Warning: Changing the desktop wallpaper is forbidden in Windows 7’s EULA (§8). However, in some countries, a license agreement is not valid if the user first sees it after buying the product (the netbook, for example), this is why this tool exists. 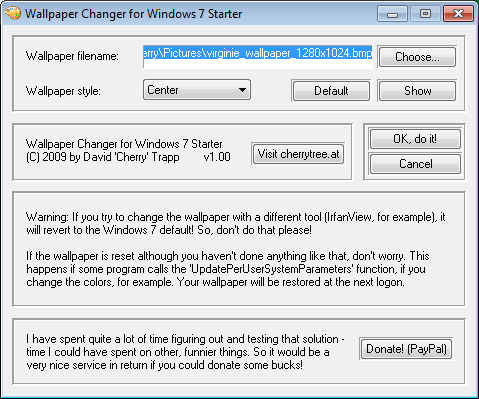 (removed due to legality concerns)